As much of U.S. dials back on July 4, Trump goes big 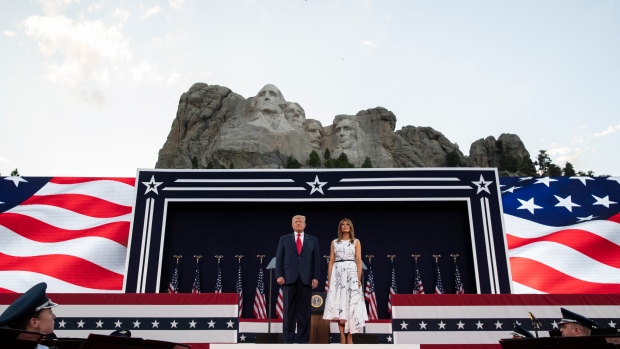 The president kicked off the holiday weekend by travelling to Mount Rushmore in South Dakota for a fireworks display Friday night near the mountain carvings of George Washington, Thomas Jefferson, Abraham Lincoln and Theodore Roosevelt.

His participation in big gatherings comes as many communities have decided to scrap fireworks, parades and other holiday traditions.

The goal is to try to prevent further spread of the coronavirus, which large gatherings could spur.

Trump spent little time in his Mount Rushmore address reflecting on pandemic, which has killed more than 129,000 Americans.

Trump has been aching to see the nation return to normalcy, and has been willing to push the envelope further than many states and big city mayors are willing to go.

Trump is accustomed to jam-packed crowds, but the BOK Center was only about one-third full for the president's first rally of the coronavirus era.

Days later, he addressed a packed megachurch for a Students for Trump event in Arizona.

Washington Mayor Muriel Bowser, who said she didn't have the right to shut down the holiday spectacle because it's on federal land, warned the federal government about the obvious dangers of such a large crowd.

On Friday, she urged the city's residents to be smart about how they spend the holiday.

In other holiday weekend developments:.

Pritzker, D-Ill., said he would not hesitate to close down businesses that don't abide by capacity requirements, and he encouraged people to avoid large crowds

Florida's most populous county, Miami-Dade, closed beaches through the weekend, and South Florida municipalities from Vero Beach to Broward County did the same

--About 150 preachers, rabbis and imams intended to frame holiday sermons around "What to the Slave is the Fourth of July" on the 168th anniversary of that speech by Black abolitionist Frederick Douglass