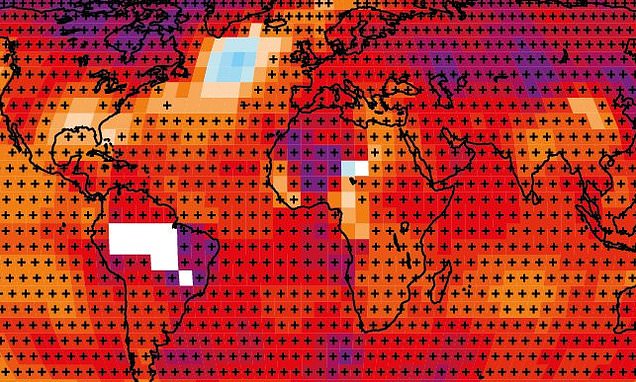 A strange 'cold blob' in the Atlantic Ocean that is cooling as the rest of the world heats up is caused by shifting ocean currents and low-level clouds, a study found. .

The blob — or 'warming hole' — was first spotted in 2015 and has been connected to a weakening of the so-called Atlantic Meridional Overturning Circulation (AMOC).

As the AMOC carries heat from the tropics to the North Atlantic, it also has a vital role to play in affecting the climate and weather across Europe.

Furthermore, modelling suggested that heat transport out of the hole is aided not only by the weakened AMOC but also by high latitude ocean circulation — or a 'gyre' — and an overturning of water north of the cold blob. .

Analysis by researchers from Germany has revealed that the causes of the cooling blob are slightly more complicated, with many different factors at play — including the weakening of the Atlantic Meridional Overturning Circulation (shown in red) a sub-polar gyre (blue) and increased reflection of incoming solar radiation (yellow) through low-lying cloud formation.

When it comes to regulating global climate, the circulation of the Atlantic Ocean plays a key role?

This is due to a constantly moving system of deep-water circulation often referred to as the Global Ocean Conveyor Belt which sends warm, salty Gulf Stream water to the North Atlantic where it releases heat to the atmosphere and warms Western Europe.

When it comes to regulating global climate, the circulation of the Atlantic Ocean plays a key role.

Researchers believe that as the North Atlantic began to warm near the end of the Little Ice Age, freshwater disrupted the system, called the Atlantic Meridional Overturning Circulation (AMOC).