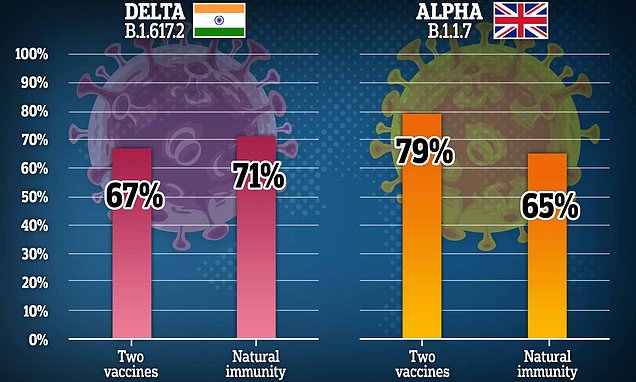 Oct 18, 2021 1 min, 42 secs
Recovering from Covid offers just as good protection as getting two doses of any vaccine, official figures suggest. .An Office for National Statistics' (ONS) report published today found unvaccinated Britons who catch the Delta variant are around 71 per cent less likely to test positive for a second time.It estimated the risk of infection is slashed by approximately 67 per cent in people given two doses of Pfizer or AstraZeneca's jabs.Using a statistical analysis, the report found those who were double-jabbed had a reduced the risk of testing positive by between 64 and 70 per cent, giving the headline figure of 67 per cent.In people who were unvaccinated but previously positive, the risk was cut by between 65 per cent to 77 per cent. .Writing in the report, the ONS said: 'There was no evidence that the reduction in risk of infection from two vaccine doses differed from that of previous natural infection.' .But critics of the Government's decision to vaccinate healthy school pupils as young as 12 have argued that natural immunity is better for children because it removes the small risk of side effects from the jabsAt that time, double-vaccination cut the risk of testing positive for the virus by 79 per centSarah Crofts, the head of analysis for the Covid infection survey, said in a blog post that the drop in vaccine protection between the two recording periods was likely down to waning of vaccine immunity'Additionally, when we estimate the risk of infection among vaccinated people compared to unvaccinated people, we need test results from each group of peopleDepartment of Health data suggests some 45.3million people — or more than nine in ten adults — have already received two doses of the Covid vaccineA study in Israel published last month found that unvaccinated people with natural immunity were 13 times less likely to catch Covid than double-jabbed people who had never been exposed to the virus beforeHowever, experts at King's College London found that people with two vaccines enjoy up to 80 per cent protection against infection compared to just 65 per cent in the natural immunity group
source :- Daily Mail
1. The Worst Sleep Habit Causing You to Feel Older, New Study Says — Eat This Not That - Eat This, Not That Nov 26, 2021 # health 25 secs 2. COVID-19: Vitamin D may be able to 'switch off' lung inflammation - Medical News Today Nov 26, 2021 # health 1 min, 59 secs 3. As Overdose Deaths Hit A Record High, Here’s What I Need You To Know - HuffPost Nov 26, 2021 # health 1 min, 22 secs 4. Pets: Dogs fed once a day are less likely to be diagnosed with age-related conditions - Daily Mail Nov 26, 2021 # health 1 min, 22 secs 5. Children 5-11 and COVID vaccines: 5 things the CDC wants parents to know - Palm Beach Post Nov 26, 2021 # health 19 secs 6. Fatty liver disease: Signs you have the condition - the 'foul-smell' to look out for - Daily Express Nov 26, 2021 # health 43 secs 7. The pandemic is deeply affecting many people with eating disorders - STAT - STAT Nov 26, 2021 # health 2 mins, 12 secs 8. Housework can cause women to struggle more than men in old age, research suggests - Daily Mail Nov 26, 2021 # health 49 secs 9. High blood pressure: The sign on your face of the ‘silent killer’ - Daily Express Nov 25, 2021 # health 36 secs 10. Enhanced fusogenicity and pathogenicity of SARS-CoV-2 Delta P681R mutation - Nature.com Nov 25, 2021 # health 1 min, 29 secs 11. Hypertension diet: The 32p ‘superfood’ to bring blood pressure down - Daily Express Nov 25, 2021 # health 56 secs 12. Why are coronavirus cases and hospitalizations on the rise in the US? - ABC News Nov 25, 2021 # health 1 min, 0 secs 13. Ancient case of disease spillover discovered in Neanderthal man who got sick butchering raw meat - CNN Nov 25, 2021 # health 1 min, 21 secs 14. Who’s getting sick? Report sheds new light on breakthrough cases and vaccine protection against hospitalization - Toronto Star Nov 25, 2021 # health 1 min, 39 secs 15. Delta Variant May Have 'Mutated Itself Into Extinction' In Japan, Suggest Researchers - IFLScience Nov 25, 2021 # health 1 min, 4 secs 16. Nasal Alzheimer's Vaccine To Start Human Trials for the First Time - Interesting Engineering Nov 25, 2021 # health 42 secs