Earth farthest from the sun on July 4 - EarthSky 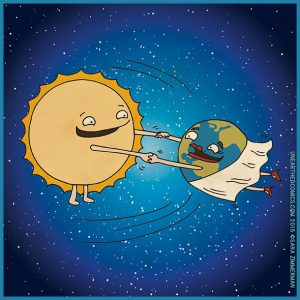 Planet Earth reaches a milestone on July 4, 2020, as it swings out to aphelion, its most distant point from the sun.

Peter Lowenstein in Mutare, Zimbabwe – who captured the photos and created the composite – wrote: “Although taken 18 months apart, and a few days from the events due to adverse weather conditions, they show that there is an unmistakable size difference of the sun as viewed from Earth when it is closest at perihelion and farthest away at aphelion.”.

This animation shows what’s also in the image above … the size difference of the sun between Earth’s perihelion (closest point) and aphelion (farthest point).

Right now, it’s summer in the Northern Hemisphere because the northern part of Earth is tilted most toward the sun.

Meanwhile, it’s winter in the Southern Hemisphere because the southern part of Earth is tilted most away from the sun.