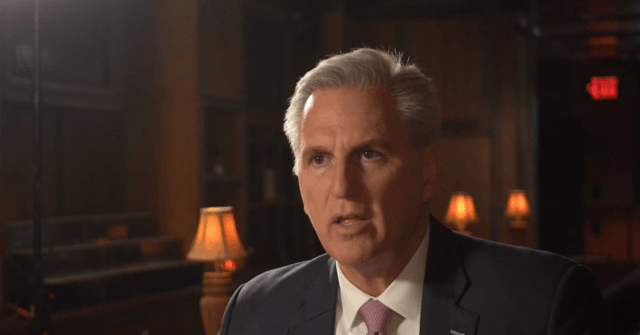 Nearly a year ago when he first took over as president, Biden signed executive orders shutting down the Keystone XL pipeline and halting natural gas and oil drilling and exploration on federal lands nationwide.

went from being energy independent and a net exporter of energy under Trump to having energy shortages and sky high gas prices under Biden.

Biden also allowed Russian President Vladimir Putin to open up Nord Stream 2, a natural gas pipeline in eastern Europe, even after he shut down similar but safer efforts here in the United States.

The Eugal gas pipeline will transport natural gas arriving from Russia through the Nord Stream 2 pipeline 480km across eastern Germany.

One, with the economy, simply because if you have lower gas prices, people have more money and they have the ability to produce the products here in America and compete overseas,” McCarthy said.

The other part you have to think is if we’re not producing it, we’re still consuming it.

McCarthy noted that Putin having the pipeline in Europe means he controls the countries that depend on that natural gas for energy.“Why does Putin want another pipeline?” McCarthy said?