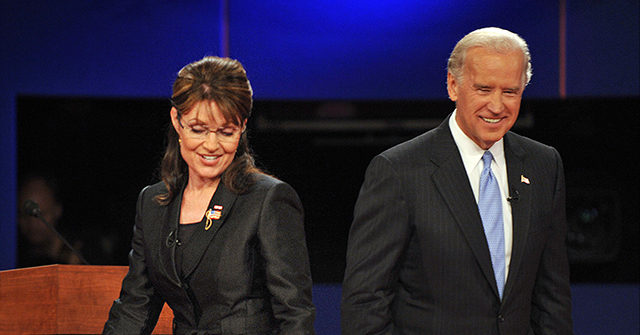 Biden had no solutions to the problem of high gas prices, and 13 years later, he remains as clueless.

His response to high energy prices is to run and beg OPEC, the international cartel, for more oil.

Republican Sarah Palin (right) and Democrat Joseph Biden (left) participate in the vice presidential debate on October 2, 2008, at Washington University in St.Why does Biden not want to produce here in America with American workers generating tax revenue for the American economy — where high paying jobs are created for American families and where we have stricter environmental and worker safety standards than anywhere else in the world.

Recall that exactly one year after we were on that VP debate stage together, then-Vice President Biden proudly signed off on a $535 million loan to a little-know solar company called Solyndra. Taxpayers were burned on that deal, and now Biden’s trying to take even more of our hard-earned money for more Solyndras.

In this May 26, 2010, photo, President Obama, center, is given a tour of Solyndra by Executive Vice President Ben Bierman (right) as Chief Executive Officer Chris Gronet (left) walks along at Solyndra Inc.

The White House looks to our adversaries to provide us with the energy we need to survive; and it’s energy we have right underfoot.

Americans innately understand “Drill, baby, drill,” which is why it resonated on the campaign trail in 2008. It is why in 2019, we became the world’s largest oil and gas producer, lowering emissions while relegating OPEC to irrelevance. We succeeded because we got government out of the way, and the great American system of free markets drilled.

It’s a call for more America.