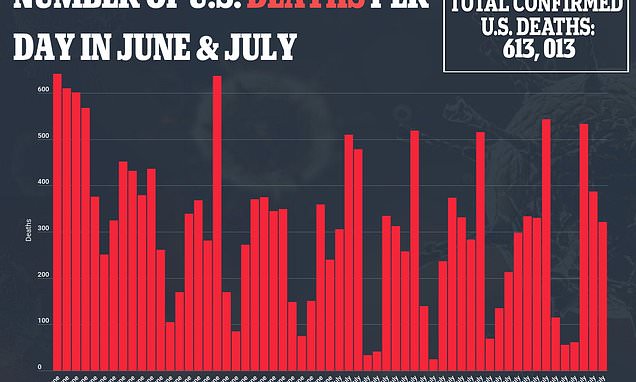 Jul 31, 2021 2 mins, 14 secs
A massive data dump by Florida and DelawareÂ has skewed the daily COVID-19 death figures compiled byÂ the widely-respected Johns Hopkins University and made it appear that they jumped by 300 percent Friday.The state only reports its COVID-19 figures once a week on a Friday, meaning all deaths over the last seven days are added to the total in one lump sum and that the real daily change in the last 24 hours remains unknown.Â Â .Following the removal of these three anomalies, daily deaths instead climbed 2.5 percent from 321 Thursday to 329.Â Â .On Friday, the US recorded 194,608 new COVID-19 cases.Â The current seven-day average of new daily cases is roughly 67,000 - an increase of 53 per cent compared to just one week ago.Â .The highest seven-day day average of new COVID cases recorded in the US was roughly 251,000 back on January 8 before case counts dropped off in the spring as the country's vaccination campaign picked up pace.Â .Florida made up almost half of the daily death tally, with 409 of the deaths recorded coming from the Sunshine State but this is because it only reports its COVID-19 figures once a week.Texas has seen deaths almost double over the last week, rising from a seven-day rolling average of 23 on July 28 to a seven-day rolling average of 52 on July 30.This comes as the state is lagging in its vaccine rollout with just 43.7 percent of people fully vaccinated, compared to 49.5 percent of the total population.

COVID-19 deaths have also trebled in the last fortnight in Louisiana, rising from seven deaths on a seven-day rolling average on July 16 to 21 on Friday.