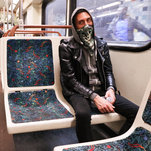 Apr 05, 2020 7 mins, 42 secs
On the evening of March 4, James Cai, a 32-year-old physician assistant, was languishing on a cot, isolated in a small, windowless room on the emergency-room floor of Hackensack University Medical Center, when the television news caught his attention.

ImageJames Cai, 32, in his primary care office in Flushing, Queens, before he fell ill.Credit...From James CaiOn March 2, many doctors on the East Coast still saw Covid-19 as an ominous but distant threat.

But the doctor was worried that Cai’s symptoms — that cough, surprisingly powerful for something that had kicked in so recently, and an elevated heart rate — were consistent with a possible pulmonary embolism, a clot in an artery in his lung that could prove fatal.

He advised him to go immediately to the nearest emergency room, H.U.M.C., where they could give him a CT scan, which would provide a more detailed picture.

Not long after, he was moved to the small, windowless room, where he started to feel even worse: short of breath, feverish.

The next morning, March 3, not long after his CT scan, a nurse came to give him a Covid-19 test.

ImageThe first CT scan of Cai’s lungs from when he first arrived at the emergency room.Credit...From James CaiThe following day, an infectious-disease doctor, Bindu Balani, a calm woman with a gentle delivery, came to see him in his room, also wearing P.P.E.

Cai hated being in that room on the emergency-room floor, where all night long he could hear people crying out in pain or wailing in grief.

He tried to tune it out, to take in the consoling texts from friends who knew he was at the hospital.

Many of his closest colleagues and friends were immigrants and medical professionals like him.

But now that Huang knew that his friend really had tested positive, it dawned on him that Cai was alone in a room facing what could be a life-threatening virus, in a hospital where no one had ever encountered it.

Huang had, among many of his friends, a reputation as a big-brother type — someone who followed up to see how your mother was feeling if she had been ill; who always finessed picking up the check; who lent money to his friends if he thought he could help them with a good investment.

As early as late February — when people in New York were still flying around the globe, clutching poles on the subway, hugging friends hello — Cai made two trips to Costco in Brooklyn to buy provisions: frozen vegetables.

Many of Cai’s friends who were fellow Chinese immigrants were also stocking up.

He and some of his Chinese-American friends, most of them first-generation, wore masks in public starting in January, reminded that it was a common-sense precaution by the devastating news from Wuhan.

Cai — and many of his friends — stopped wearing them.

Huang also was getting in touch with everyone he knew who he thought might be able to help.

“I called up all my pulmonary friends, I.C.U.

He had a pulse oximeter on his finger and could keep an eye on his own oxygen levels.

Especially when he lay flat, his oxygen levels fell.

But his main anxiety was that his condition would deteriorate — that his lungs eventually would be so compromised that his oxygen levels would drop to a degree that endangered his life.

Of course not, Huang replied.

Huang hoped he was telling the truth.

But as he monitored his oxygen levels from his bed, he could see they were dropping.

Cai knew that the I.C.U., where the ventilators were kept, was on a different floor; if he started to crash — if his vitals indicated that his organs were in imminent danger of starting to shut down — how were doctors going to intubate him and transport him to the ventilator in time to save his life.

Cai’s family and friends were continuing to communicate with doctors in China and passing on their advice and suggestions.

It was common practice during the Covid-19 outbreak there to give patients a second CT scan to provide a clearer view of the progression of lung damage; the so-called ground-glass opacities on the lungs common with Covid-19 could easily be missed on an X-ray or mistaken for something else.

Earlier that morning, Cai told the infectious-disease doctor on call that weekend that he wanted a second CT scan, a suggestion made by top doctors in China, who thought they could help his doctors in New Jersey understand the progression of the illness.

They would determine treatment based on oxygen levels, which they were keeping an eye on.

(H.U.M.C. did not make some doctors involved in Cai’s care available for comment but responded in an email that they followed “C.D.C. and/or evidence-based protocols” that were “different from protocols physicians from China were advocating.”).

His friend Huang wanted to talk with the infectious-disease doctor on call.

We are formally requesting a second CT scan, Huang told her.

Cai’s oxygen levels were not getting better, despite the antibiotics; Huang had the sense that the doctors at Hackensack did not fully appreciate how quickly patients could take a turn for the worse.

The doctor said she would bring it up with Cai’s physicians.

George Hall, also made a call, not long after Huang spoke to the infectious-disease doctor on call.

He spoke with another doctor on Cai’s caregiving team, a hospitalist named Danit Arad.

Yet another study, this one from China and published online March 30, found that patients who were mildly ill and took hydroxychloroquine fared better than the control group of mildly ill patients who did not receive the drug.

When Trump called hydroxychloroquine “a game-changer” on March 19, many researchers considered his enthusiasm premature and possibly dangerous.

Practitioners started stockpiling the drug, and doctors worried they would not to be able to provide it to autoimmune-disease patients who relied on it.

As for Kaletra, a study in March in The New England Journal of Medicine found it did not help patients suffering severe illness related to coronavirus, though researchers left open the possibility that it might be more effective earlier in the course of treatment.

Concerned, he messaged a WeChat group that included his father and a doctor his father knew in Shanghai, who had been advising that Cai be put on a high-flow nasal oxygen cannula, a device that allows for a more intensive and stable delivery of oxygen into the lungs.

Hall contacted a prominent local doctor, Henry Chen, who oversaw a sprawling network of community-health doctors in New York, in the hope that he could get in touch with someone at the hospital.

The morning of Sunday, March 8, Cai woke up.

There was his phone with the photos of his friends and family, the beeping machinery above his head.

He read over and over the cards that friends had sent him, tangible objects from the outside world that let him know that he had not been forgotten.

He continued to text with Huang, who by then was having his own anxieties.

The method allows patients at risk of respiratory failure to stave off intubation and ventilators; but because the patient can breathe and talk through the mouth, the oxygen mixes with the virus in the patient’s nose and windpipe and, especially at highest pressures, can be breathed out into the air.

Later that day, March 8, he asked the nurse to bring him some paper.

He wished he could play with her and her friends, pick her up at school, walk her down the aisle, solve her problems when she had any.

That day, Huang reached out to every Gilead representative he knew and called on all his doctor friends to do the same.

Huang posted on a large WeChat group for Chinese and Chinese-American cardiologists: “My name is Yili, great to meet everyone, unfortunately on this occasion,” he introduced himselfC

Please help me with some inputs.” With Cai’s permission, he included a photo of Cai’s CT scan.

Hundreds of doctors from around the world shared whatever they knew in comments; one doctor, an American who had been traveling back and forth to China, paged Yang at his hospital to share with him what she had learned.

Less than four hours after the image was first tweeted out, Gilead informed Cai’s doctors that the company was shipping the medicine out.

on March 10, Balani arrived at the hospital.

Even before he received the remdesivir, his oxygen levels started to stabilize.

It is impossible to know what elements of Cai’s treatment — the high-flow oxygen, the medications, the passage of time, the sense of wraparound community support, the powerful injection of last-minute hope — helped pull him through.

How Stacey Abrams has been mobilizing Asian Americans for years