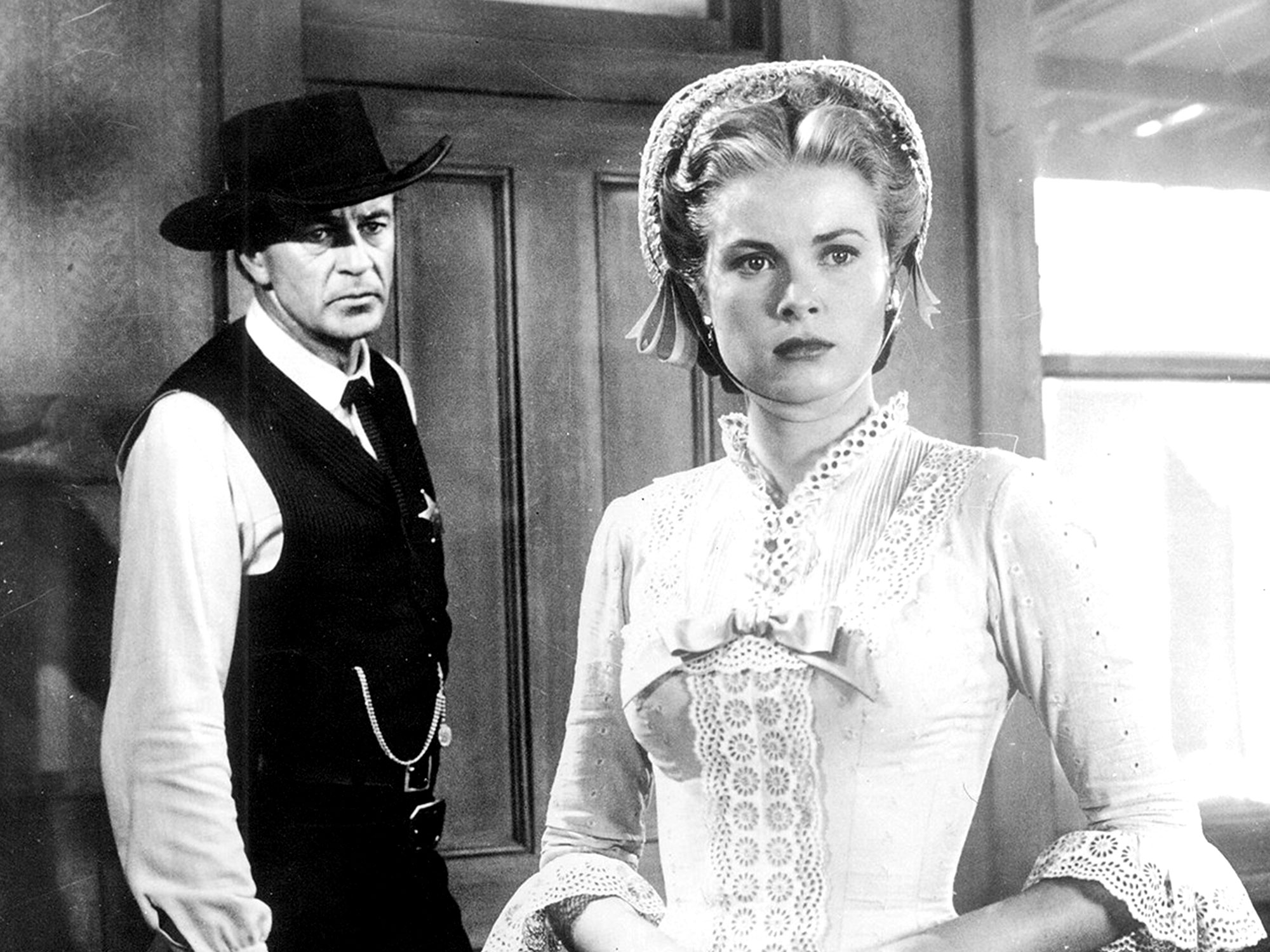 Lee Van Cleef silently awaits the arrival of his fellow gang member during the opening shot of Fred Zinnemann’s High Noon, and for his brief time on screen those iconic features seem to foresee the decline of the western genre, paving the way for the outsider, Sergio Leone, and the maverick, Sam Peckinpah.

Zinnemann’s boots remain planted in the black-and-white mentality of his contemporaries; a sense of tradition that still illustrates the West as a place to be feared yet step closely towards more sophisticated, revisionist methods such as the real-time approach of the narrative.

As the clock ticks, Gary Cooper’s town marshal, Will Kane, is torn between riding off with his wife, Amy (Grace Kelly), or facing the gang leader (Ian MacDonald) he sent down years before. With the villain on his way back on the noon train and his gang of outlaws waiting at the station, the unison between Kane and Amy is to be tested much like 1950s America.

The fear and paranoia which marked the early part of the Cold War, incubated by McCarthyism, spawned allegories of UFOs and horrific historical reminders of the witch hunts depicted in Arthur Miller’s ‘The Crucible’. These references simmer beneath the surface of High Noon, illustrating Hollywood’s failure to stand up to the House Un-American Activities Committee as a questioning of civic responsibility. At its core High Noon is a film about integrity, duty and morality – a testament to law and order.

It is with some irony, then, that screenwriter Carl Foreman, an ex-member of the American Communist Party, found himself in the crosshairs of the HUAC and was subpoenaed during the 32-day shoot. There was a growing distrust within the studio and under the pressure to throw himself and his colleagues to the wolves the blacklisting led to Foreman’s experience bleeding into the final script. Life imitated art.

With this in mind, it is easy to see how potent the clock remains throughout the film. Time counts down and the tension builds as the townsfolk begin to show their true nature. All the while, Kane’s morals and spirit, much like Foreman’s, are tested to the limit. He is now alone, his archetype laid bare and left to sweat in the afternoon sun.

This sense of abandonment echoes the backlash against High Noon, as the film was condemned by some as little more than a commie plot and rebuked by John Wayne, who deemed it ‘Un-American’. In light of Foreman’s fate, it is also no surprise that Howard Hawks, a vaunted custodian of the movie western, highlighted his own reaction to Zinnemann’s commentary in the 1959 classic, Rio Bravo.

Where the male characters show vulnerability, the female characters show rare strength for the time. Not afraid to put men in their place, the women of High Noon hint at changing attitudes which Joan Crawford followed through on two years later in Johnny Guitar. Although some rather glaring stereotypes remain, any woman with a checkered background chooses what they say carefully until sharing words of advice. “If Kane was my man, I’d never leave him like this. I’d get a gun. I’d fight.”

It’s all the motivation Amy needs. After the film’s climactic shootout, husband and wife are reunited while the cowardly town begin to appear now the dust has settled. In true western fashion, Kane’s glance explains everything, his badge tossed aside. Where a sense of duty was once pinned to his waistcoat, wearing his masculinity as a mantel, now he leaves it in the dirt. After all, he has the rest of his life to live.

The post How the politics of High Noon forged a new path for the western appeared first on Little White Lies.