Inside clash between Minneapolis police and union: Arradondo and Kroll - Business Insider 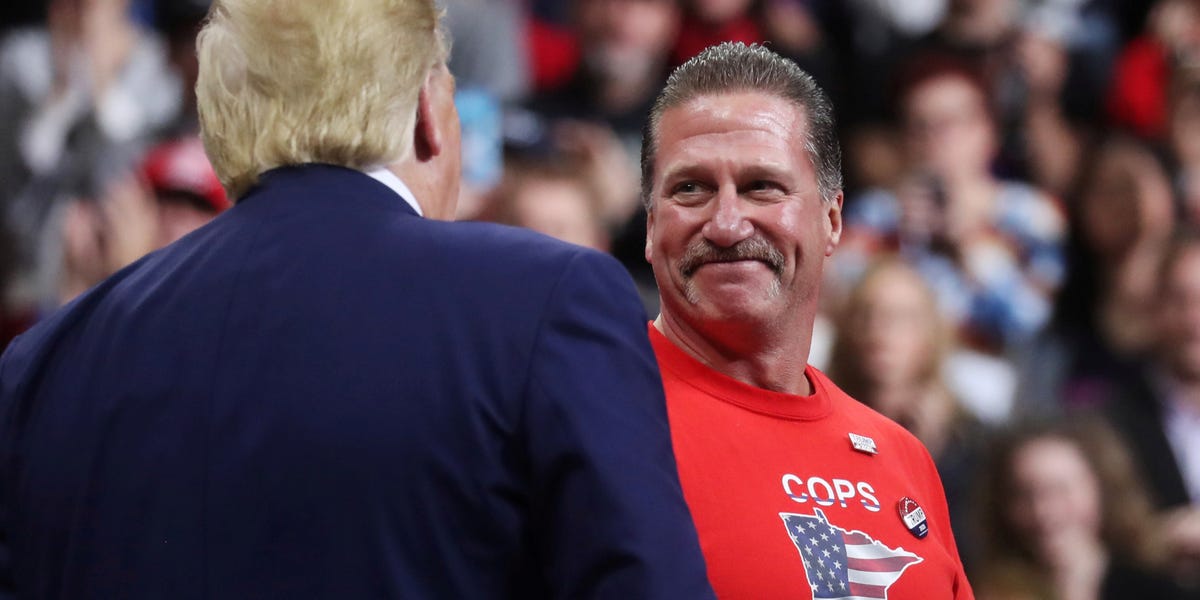 Among other things, the black cops' suit claimed that white officer Bob Kroll, who joined the police force the same year as Arradondo, called then-US Congressman Keith Ellison, who is a black Muslim, a "terrorist.".

And Kroll is the head of the local police union that has defended the officers involved in Floyd's death.

Though Arradondo called out Kroll's bad behavior in his lawsuit years ago, the union leader has generally spoken well of his chief: "He's the opposite of a narcissist," Kroll told the Star Tribune.

Kroll said the officers at the scene "were in compliance with existing body camera policy.".

Kroll called Arradondo's decision "politically motivated." Kroll said of police union's members that "We're going to be there in full force, in T-shirts, letting people know that off-duty officers do have support for our president.".

In a letter addressed to union members, Kroll said the officers were "scapegoats" and had been fired "without due process.".

Bob Kroll got his start in the Minneapolis police department in 1989.

The son of a union man, Kroll joined the Minneapolis Police Federation in 1996. .

Another suit from 2007 claimed Kroll and a group of officers used excessive force on an elderly couple during a SWAT team search.

As union chief, Kroll has protected other aggressive officers in his ranks.

After the police department reinstated Andersen, Kroll said he was "very happy" because Andersen was "born to be a cop," the Pioneer Press reported.

Kroll later defended the two officers involved in the 2016 killing of Jamar Clark, a 24-year-old black man who witnesses said had been handcuffed, calling their actions "justified." .

After taking his role as union head in 2015, Kroll frequently sparred with then-Police Chief Janeé Harteau, who between 2012 and 2017 was the first female and first openly gay police chief in Minneapolis history, before getting ousted from her post following a police killing.

The Philando Castile shooting in 2016, which occurred outside of Minneapolis, in Falcon Heights, became a Kroll story when he said he commended four off-duty officers walking out of their security duties at a Minnesota Lynx WNBA game.

In a leaked email, City Pages reported that Harteau told Kroll not to wear his uniform while speaking as the labor union representative.

When Arradondo succeeded Harteau as chief in 2017, he was the first black person to head the Minneapolis Police Department in its 150-year history, the Star Tribune reported.

In Minneapolis, Reuters found that nine out of every 10 accusations of misconduct from city police officers were resolved without punishment

In a podcast interview this past April, Kroll said he has been involved in "three shootings" himself, The Intercept reported.

Brooklyn College sociologist Alex Vitale, author of "The End of Policing" and former vice president of a faculty union, told Business Insider that the labor movement should limit police unions and expose their "terrible politics." Vitale said the broader labor movement has lost its broader mission to aid social justice, which allowed AFL-CIO to cozy up with police unions.

During his election campaign, current Minneapolis Mayor Jacob Frey acknowledged the role the police union played in protecting members from getting disciplined for aggressive behavior

"They're looking at their job as often unions do: Let's protect our officers from getting terminated," Frey said during a 2017 meeting on police reform