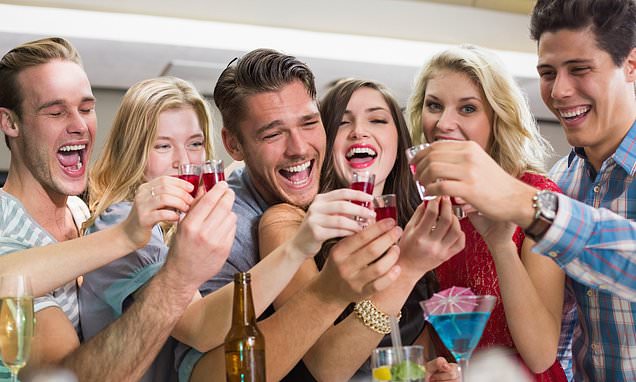 May 10, 2021 1 min, 49 secs
The experts, at University of Illinois Urbana-Champaign, compared the effects of alcoholic and non-alcoholic drinks on distancing between friends and strangers. .In a lab setting, alcohol caused the strangers to draw significantly closer to each other during social exchange, reducing physical proximity at a rate with 'potentially important implications for public health'. .The study suggests trying to implement any form of social distancing in British pubs once they open properly would be a lost cause.  .Strangers and alcohol is a potentially hazardous mix as far as social distancing is concerned, according to the US study.No previous studies have tested the effects of alcohol consumption on social distancing, according to the researchers – in fact, they say there's been a complete lack of evidence regarding alcohol's effects.  .'Health officials warn that alcohol consumption may lead to decreased adherence to physical distancing guidelines. .The start of the pandemic saw the Government impose a broad two metre social distancing rule which applied across all of society.  .But it also introduced a new 'one metre plus' rule for circumstances where a two-metre distance could not be stuck to'We measured distance between the individuals via machine-learning methods that detect hands, arms, legs and head position for each person in the video,' said study co-author Nigel Bosch, a professor of information sciences and of educational psychology at the university. 'The physical distance between these pairs decreased by about 1 centimetre [0.4-inch] per three-minute interval,' Fairbairn said'This study shows that over time, alcohol reduces physical distance between people who are not previously acquainted,' said study author Laura Gurrieri. 'This finding is particularly important in the context of the Covid-19 pandemic because it suggests that alcohol might facilitate virus transmission and impede the following of social distancing guidelines.'The PM said he hopes it will be possible to axe the existing one-metre plus rule when the nation reaches the final step in his lockdown exit roadmap. 'But it also looks to me as though June 21 we'll be able to say social distancing as we currently have to do it, the one-metre plus, I think we have got a good chance of being able to dispense with the one-metre plus from June 21
source :- Daily Mail
1. Why India Is Dealing With a Deadly 'Black Fungus' Epidemic - The New York Times Jun 20, 2021 # health 1 min, 57 secs 2. Sen. Rand Paul: 'In all likelihood' COVID escaped from a Wuhan lab - Fox News Jun 20, 2021 # health 47 secs 3. Missouri leads nation in COVID cases per 100000 residents - STLtoday.com Jun 19, 2021 # health 23 secs 4. What's Set to Be 'Biggest-Selling Medicine Ever' Had Bumpy Start - Newser Jun 19, 2021 # health 39 secs 5. Nearly 52% of Utahns ages 12+ fully vaccinated against COVID-19 - Salt Lake Tribune Jun 19, 2021 # health 17 secs 6. Rep. Massie scolds reporter who asks if he's vaccinated - Fox News Jun 19, 2021 # health 1 min, 2 secs 7. Get Caught Up: Michigan to lift all COVID restrictions on capacity, masks, gatherings June 22 - WDIV ClickOnDetroit Jun 19, 2021 # health 46 secs 8. Alec Baldwin Says His Lyme Disease Symptoms Have Lingered for 20 Years - Prevention.com Jun 19, 2021 # health 47 secs 9. Rabid dog imported into southeastern Pa. sparks multi-state investigation - lehighvalleylive.com Jun 19, 2021 # health 34 secs 10. Statins side effects: The drug is known to cause issues with the bowels – what to spot - Daily Express Jun 19, 2021 # health 30 secs 11. Half of Unvaccinated People in the U.S. Have This in Common, Research Shows - Yahoo Lifestyle Jun 19, 2021 # health 1 min, 39 secs 12. WHO declares end to second Ebola outbreak in Guinea - Al Jazeera English Jun 19, 2021 # health 27 secs 13. Covid-19: Queues at pop-up vaccine centres as jabs push goes on - BBC News Jun 19, 2021 # health 4 mins, 11 secs 14. Five reasons you may still want to wear a mask - San Francisco Chronicle Jun 19, 2021 # health 59 secs 15. COVID-19 LIVE UPDATES: Missouri announces more than 600 new COVID-19 cases Friday - KMBC Kansas City Jun 19, 2021 # health 8 mins, 25 secs 16. Rabid dog imported into US sparks multi-state investigation - ABC News Jun 18, 2021 # health 20 secs