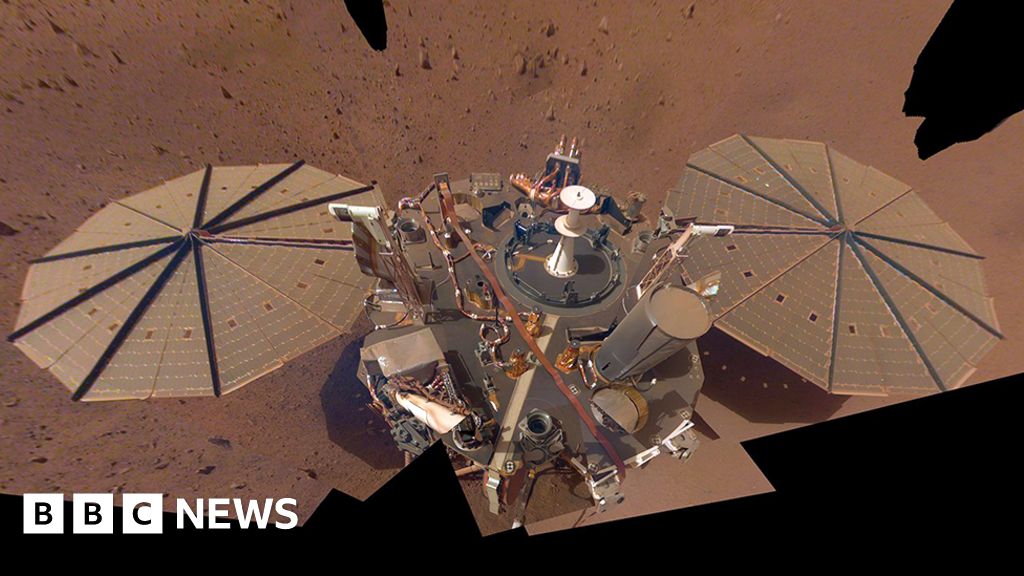 May 18, 2022 1 min, 56 secs
The seismometer on Nasa's InSight probe will keep listening for Marsquakes even as other systems on the mission have to shut down due to declining power levels.The spacecraft has just detected a Magnitude 5 tremor - the biggest event yet in its three years of operation on the Red Planet.The all-important seismometer can be put in a reduced working mode for a while, coming on for only part of a Martian day, or Sol, and then perhaps only every other day."[In July] we anticipate our seismometer to be turned off, not because we want to turn it off but unfortunately we don't have the energy to run it," said Kathya Zamora Garcia, InSight's deputy project manager at the US space agency's Jet Propulsion Laboratory (JPL) in Pasadena, California.The mission, which landed in a flat landscape known as Elysium Planitia in 2018, has transformed our understanding of the interior of the Red Planet."Whereas we know a lot about the outside of Mars - we've taken images, we've taken spectra, we've made measurements of the surface of Mars for the last 50 years - InSight's been the first mission to shine a light beneath the surface of Mars and show us what the rest of the planet looks like.".Scientists knew that at some point Martian dust would settle on InSight's solar wings to block out the Sun's rays.The M5 was detected on the Martian morning of 4 May.The terrain there is heavily faulted as a result of past volcanic activity on Mars.The vast majority of quakes on Mars likely stem from thermal anomalies in the crust."InSight has been an incredible mission for us, and it's given us a glimpse of Mars that we couldn't get from any other spacecraft in our Nasa Mars fleet," said Lori Glaze, the director of Nasa’s planetary science division"Understanding Mars and studying Mars' interior structure answers key questions about the early formation of the rocky planets in our inner Solar System, including Mercury, Venus, Earth, Earth's Moon, and Mars, as well as helping us understand rocky [planets beyond our Solar System]."
source :- BBC News
1. NASA aims to launch the SLS rocket in just 2 months - Ars Technica Jun 28, 2022 # science 55 secs 2. This Tiny Satellite Used an Off-the-Shelf GoPro to Take an Epic Selfie in Space - Gizmodo Jun 28, 2022 # science 42 secs 3. US Space Force's X-37B space plane nears orbital record - Space.com Jun 28, 2022 # science 1 min, 22 secs 4. Largest star in Milky Way is DYING and could collapse into a black hole... - The US Sun Jun 28, 2022 # science 29 secs 5. Rock samples from NASA's Curiosity Mars rover contain key ingredient of life - Space.com Jun 28, 2022 # science 1 min, 31 secs 6. White dwarf seen to survive its own supernova explosion - Space.com Jun 28, 2022 # science 1 min, 49 secs 7. NASA begins return to the moon with low-cost CAPSTONE mission, launched by Rocket Lab - CNBC Jun 28, 2022 # science 30 secs 8. One of Webb Space Telescope's Primary Instruments Ready To See Cosmos in Over 2000 Infrared Colors - SciTechDaily Jun 28, 2022 # science 1 min, 14 secs 9. The Costs of NASA's Modern Moon Mission Are Really Adding Up - CNET Jun 28, 2022 # science 4 mins, 31 secs 10. Rare, effortless: This is how it looked when Venus came face to face with Sun - India Today Jun 28, 2022 # science 57 secs 11. The Lancet more than doubles its impact factor, eclipsing NEJM for the first time ever - Retraction Watch Jun 28, 2022 # science 1 min, 49 secs 12. BepiColombo Spacecraft Makes Second Gravity Assist of Planet Mercury – Captures Spectacular Close-Ups - SciTechDaily Jun 28, 2022 # science 2 mins, 37 secs 13. Mars Has So Much Radiation, Any Signs of Life Would Be Buried Six Feet Under - ScienceAlert Jun 28, 2022 # science 1 min, 21 secs 14. There's a Surprising Similarity Between The Brains of Humans And Octopuses - ScienceAlert Jun 28, 2022 # science 38 secs 15. Two Genes Crucial for Plants Colonizing the Earth 470 Million Ago Have Been Identified - SciTechDaily Jun 28, 2022 # science 2 mins, 9 secs 16. The Organization | [GO RUSH!!] Cards from Episode 13 - YGOrganization Jun 27, 2022 # science 50 secs