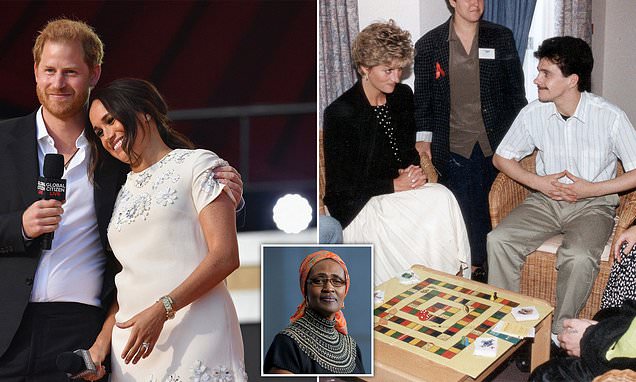 Dec 01, 2021 1 min, 49 secs
The Duke of Sussex told viewers in a YouTube video today that there were 'striking parallels' between the Covid-19 pandemic and the HIV epidemic.The clip also featured Harry and his wife Meghan Markle during the Global Citizen Live event in New York in September which called for a vaccine equity policy. .Today's video came out on World Aids Day as part of the People's Vaccine Alliance coalition of groups and activists which is campaigning for a 'people's vaccine'. .The video featured clips of Harry's late mother Diana, Princess of Wales meeting Aids patients.It is striking to now see the world's leading AIDS activists are also leading the call for COVID-19 vaccine equity.

Vaccinating the world is a test of our moral character and we are experiencing a spectacular failure when it comes to global vaccine equity.

The Duke said: 'In the early 2000s, a wave of activism helped break drug company monopolies, giving millions of people access to generic medicines at a fraction of the price.'.The video concluded with Harry and Ms Byanyima saying: 'Break the monopolies, share the know-how, deliver a people's vaccine.' .He said there had been a 'spectacular failure' over coronavirus vaccine equity'Vaccinating the world is a test of our moral character and we are experiencing a spectacular failure when it comes to global vaccine equity,' Harry wroteThe Duke warned that repeating the failures surrounding the Aids epidemic would be a 'betrayal of the next generation'The Duke had been at Global Citizen Live, an event which urged leaders to adopt a vaccine equity policy, at which he labelled pandemic a 'human rights crisis'. The video told viewers: 'Break the monopolies, share the know-how, deliver a people's vaccine'Another grab from the video which was released by the alliance on what is World Aids DayThe People's Vaccine Alliance video included the following images of people being testedThe video was narrated by Prince Harry and UNAids executive director Winnie ByanyimaThe Duke also said at the time that less than 2 per cent of people in the developing world had received a jab with many healthcare workers remaining unvaccinated.

We urgently need a People's Vaccine to benefit everyone, everywhere.'