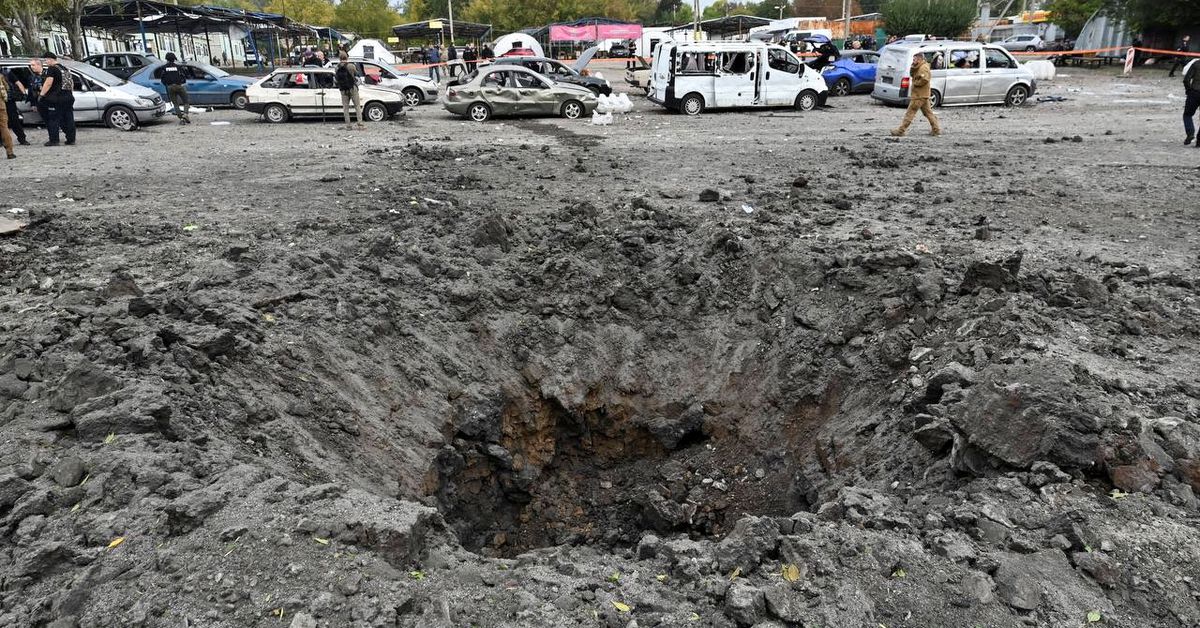 Sep 30, 2022 1 min, 51 secs
ZAPORIZHZHIA, Ukraine, Sept 30 (Reuters) - A missile attack on a convoy of cars in southern Ukraine killed a number of civilians on Friday, hours before President Vladimir Putin was due to proclaim Moscow's rule over lands it has seized in his invasion.The convoy was assembling in a car park near Zaporizhzhia city to carry people and supplies into Russian-held territory in Ukraine's southern Zaporizhzhia province.The attack took place hours before President Vladimir Putin was due to stage a ceremony in an ornate Kremlin hall to proclaim Russia's rule over around 15% of Ukraine, the biggest annexation in Europe since Hitler.The Russian annexation, held after what the West denounced as phoney referndums at gunpoint in occupied territory, followed weeks of defeats for Moscow's forces on the battlefield in which they were routed from their positions in Ukraine's northeast.Military experts said Russia could soon be facing one of its biggest defeats of the war so far, with thousands of troops trapped in Lyman, the last major Russian stronghold in the north of Donetsk province."Possible that the pocket collapses tonight or tomorrow, which would overshadow the annexation announcement," tweeted Rob Lee, an expert on the Russian military and senior fellow at the Foreign Policy Research Institute.A crater left by a Russian missile strike, that hit a convoy of civilian vehicles amid Russia's attack on Ukraine, is seen in Zaporizhzhia, Ukraine September 30, 2022.

Last week he endorsed the annexation, ordered the call-up of reservists, and threatened to use nuclear weapons if Russia is attacked.

On the eve of the annexation ceremony in the Georgievsky Hall of the Great Kremlin Palace, Putin said that "all mistakes" made in a call-up announced last week should be corrected, his first public acknowledgment that it had not gone smoothly.

Russian officials have publicly said older men or those with no military experience should by exempt, but call-up notices have been given to men of all ages and background.

Kremlin spokesman Dmitry Peskov did not say whether Putin would attend the concert, as he did at similar event in 2014 after Russia proclaimed it had annexed Ukraine's Crimea region.