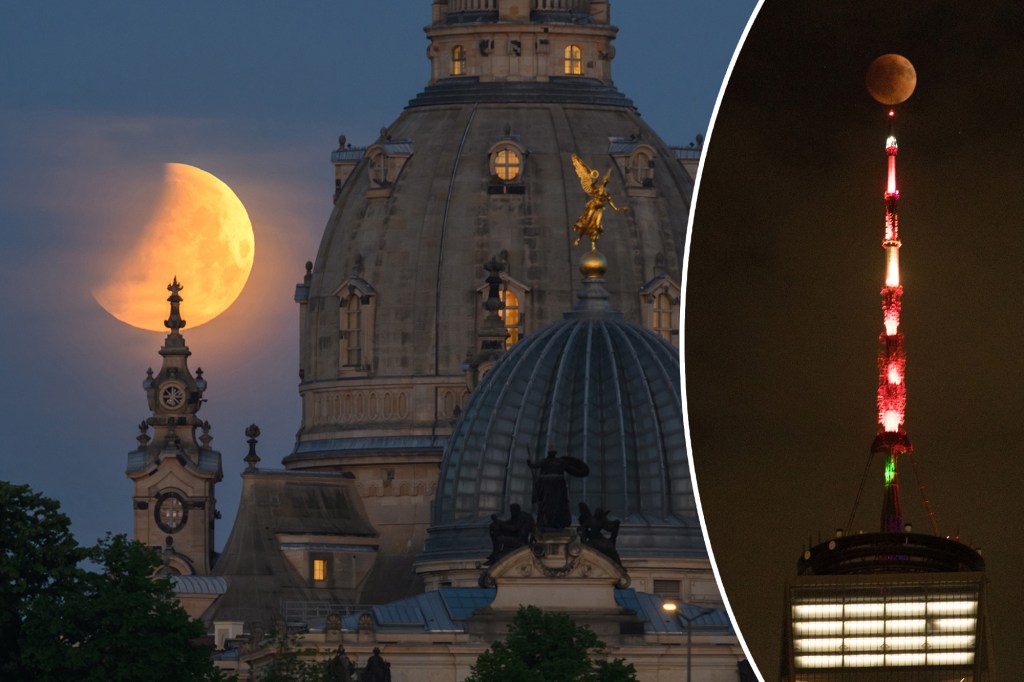 May 16, 2022 1 min, 26 secs
The lunar eclipse is seen behind the Frauenkirche and the dome of the Kunstakedmie in Germany.

A full moon moves through the shadow of the earth during a "Blood Moon" lunar eclipse above the One World Trade Center.

The full Super Flower Moon is seen rising over the Verrazzano Narrows Bridge in New York.

A lunar eclipse covers the moon as it rises beyond a statue atop the Liberty Memorial tower at the National World War I Museum in Kansas City.

The Flower blood moon is pictured behind the two-headed eagle, the national symbol of Russia atop a building on Red Square in Moscow.

A lunar eclipse is seen behind a cyclist during the first blood moon of the year, in Irwindale, Calif

The moon during an eclipse as viewed from Santo Domingo, Dominican Republic

The moon during an eclipse above the Salgo Castle in Hungary

A full moon rises above the historical city center of Mardin, famous with its stone houses, in southeastern Turkey

The moon is seen during lunar eclipse in Skopje, North Macedonia

A woman runs in front the Moon during an eclipse in the village of Tindaya, Fuerteventura island, southwestern Spain

The lunar eclipse was visible for only a few moments above the Washington Monument in Washington, DC