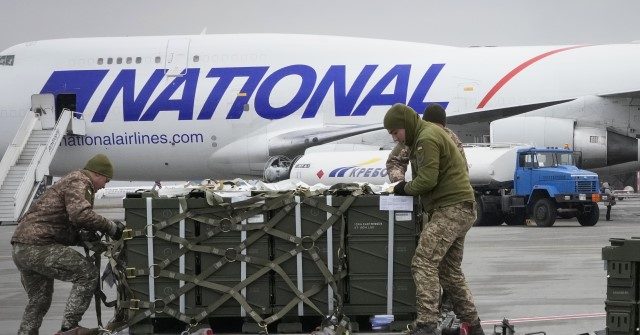 May 19, 2022 1 min, 30 secs
The Senate on Thursday passed legislation to give $40 billion to Ukraine in economic and military aid, while Americans suffer from food shortages and inflation.

“I support helping Ukraine expel the Russian invasion, but as inflation, gas prices, and shortages wallop Americans here at home I can’t support $40 billion of new spending unless it’s offset with cuts or taken from already authorized funds, especially when the European Union isn’t matching what we’re doing to end this conflict in their own backyard,” Braun, who voted against the legislation, said in a statement this week.

President Biden requested $33 billion, yet we are voting on a $40 billion package.

Let’s be clear: Supporting Ukraine in its war against Russia puts U.S.The Ukraine aid package also passed through the House with overwhelming Democrat and Republican support, although 57 Republicans voted against the legislationBreitbart News defense reporter Kristina Wong broke down the spending for the Ukraine aid package, which includes $20 billion for the Department of Defense:

— $414 million for “research, development, test and evaluation” related to the Ukraine war;

— $4.35 billion in humanitarian aid for Ukraine;

— $350 million for the State Department’s Migration and Refugee Assistance;

— $190 million for the State Department for “Diplomatic Programs”;

— $110 million for the State Department for embassy security, construction, and maintenance;

— $100 million for the State Department for nonproliferation, anti-terrorism, de-mining and related programs;

— $54 million for the Centers for Disease Control and Prevention to carry out public health and disease detection related to Ukraine;

— $4 million for the State Department’s Office of Inspector General;