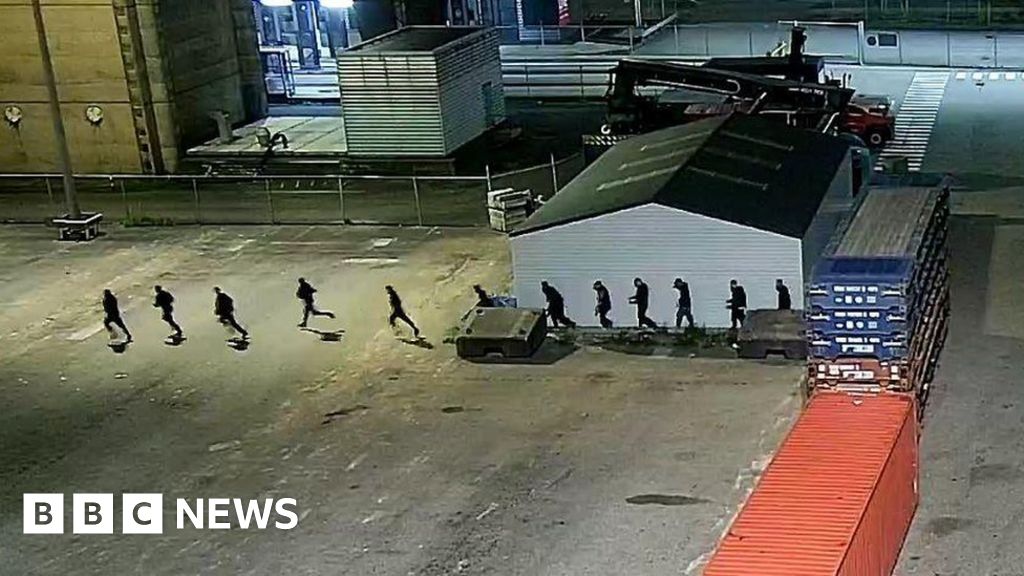 Nov 26, 2021 2 mins, 53 secs
As the volume of cocaine trafficked into the Netherlands through the port city of Rotterdam increases, so too does the number of young men employed by criminal gangs to retrieve the drugs from among freight arriving from Latin America.On a flickering CCTV screen, a dozen shadowy figures run with military precision in a line towards a shipping container in the port of Rotterdam.

Eighty kg of cocaine are hidden inside the refrigeration unit - drugs with a local street value of around 4m euro (£3.4m)!

"We first noticed them about two years ago," says Andre Kramer, who owns a container processing company in the port.

But in the past six months the groups of collectors have got bigger - 10 or 12 people gathered together, and it happens three or four times a week.".

As the volume of cocaine imported into the Netherlands rises exponentially, the methods used by the collectors are becoming more sophisticated too.

And sometimes the gangs will wait inside the port area for a drugs shipment.

In early September, nine young men found themselves trapped after the door to the shipping container they were hiding inside - partly packed with a freight of tree trunks - became jammed."If you're enclosed with biological matter like fruit or wood, these things still use oxygen, which means less for the people inside - so the air gets thinner," Jan Janse, chief of Rotterdam's Port Police explains."So we had this information that nine people were going to die in a container, but it's in a terminal amongst 100,000 other containers, and the collectors didn't know exactly where they were," Janse says.

But for security reasons Janse, who has been the chief of police here for seven years, will not reveal how they found the collectors.

In 2014, the Rotterdam authorities intercepted more than 5,000kg of cocaine in the port."This year we reckon it's going to be 60,000 kilos," Janse says?In September, 110 collectors were apprehended in the port area in just over a week."We say, 'We're just having a nice walk… We're fascinated by containers'," says the masked young man who makes his living moving narcotics out of the port.

And central to the work of the cocaine collectors and the criminal organisations they work for is one critical enabler: corruption.