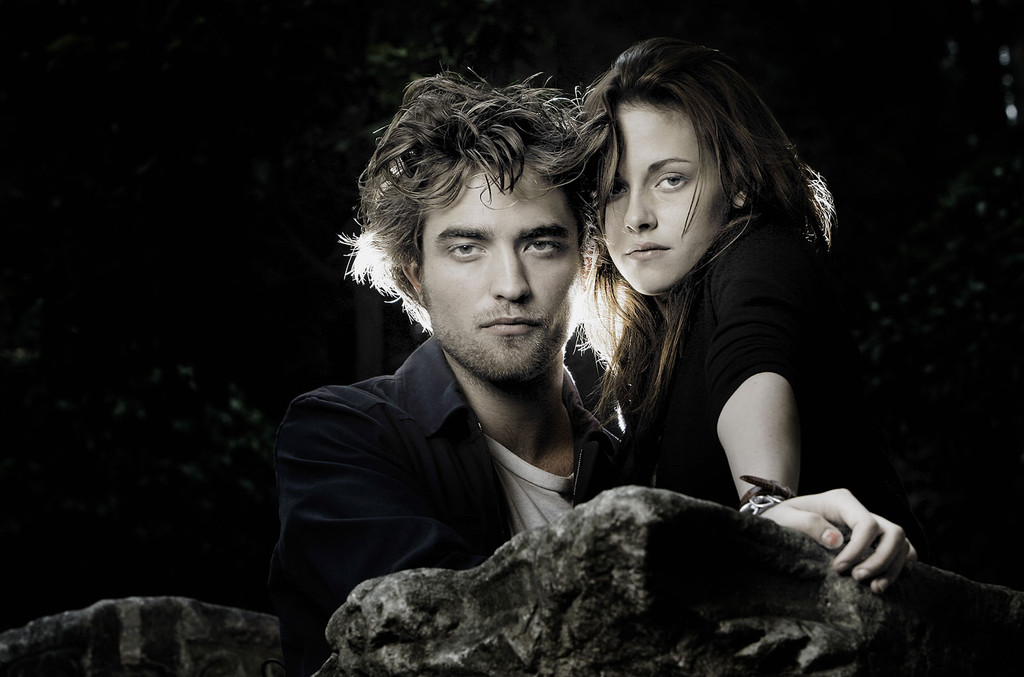 Scene: Edward gets his first whiff of Bella Swan in Biology class, and his world is about to be forever changed.

Why it fits: Grimes has described this track as “something I would want to play during an action sequence in a movie.” Though the action here is all in Edward's head, "Kill V.

Scene: Consumed by thoughts of Bella -- who he has managed not to kill so far -- Edward runs away to Alaska for almost a week.

Why it fits: As indie folk guru Robin Pecknold sings on the chorus, Edward can't accomplish anything by sitting around and "waiting for a sign." Let’s see if he can man up and do the right thing on his own.

Scene: Just as Tyler's van goes skidding toward Bella, Edward makes the snap decision to save her life -- putting his family at risk of being exposed?

Why It Fits: Edward knows that by using his superhuman strength to get to Bella, people might suspect something is off with his family and they will have to leave Forks.

Celeb Twihard Halsey has just the song to go with the scene.

Scene: While hunting, Edward keeps obsessing over Bella, wondering why she turned down all the human boys who asked her to the upcoming dance.

Why it fits: While this song could also fit with the famous “I’m your brand of heroin” line later on, this is the scene where Edward realizes he loves Bella, and thus requires Lana’s operatic, depressive stylings.

Scene: In this version, we see Edward composing his song for Bella with his adoptive vampire mother Esme by his side at the piano.

Why It Fits: Edward lived nearly 100 years without meeting his soulmate -- and even before he fell in love with Bella, he felt a strange pull toward her.

Scene: The morning after the Port Angeles date, Edward and Bella encounter Jessica at school, who is dying for all the gossip on how Bella feels about the elusive boy who never used to give girls the time of day.

Why It Fits: By reading Jessica's mind, Edward finds out that she's going to ask Bella about their relationship.

Scene: Edward, in his quest for more knowledge about Bella, quizzes her about what's in her CD player at the moment.

Why It Fits: Edward's point of view allows for more bonus details readers didn't get with Twilight -- including that Bella listens to Linkin Park and that "With You" is her favorite song.

Scene: Alice and Edward hunt together, in preparation for the next day, when Bella and Edward will reach a turning point in their relationship.

Why It Fits: Neither Alice -- who can see the future -- nor Edward know the outcome of his outing with Bella.

Why It Fits: Since Carlisle hailed from England, expect him to choose a traditional English carol to bring a measure of "comfort and joy" to Edward

And while the first known written version of the song came 100 years after Carlisle's birth, we're sure his appreciation for the arts kept him more than up to date on new music

Why it fits: Edward thinks Bella will be shocked and revolted at what he looks like in the sun, but she accepts this form of his completely

He no longer has to rely on the guise of shadows around her -- she loves him in every light, which is exactly what Girl in Red is wishing for on this sweet, but nonetheless heartbreaking, song

Scene: Edward straps Bella onto his back so he can show her what it’s like to travel at his speed, and they sprint through the forest

(Sound familiar?) While this scene takes place towards the start of Edward and Bella’s romantic relationship, we know said relationship is not going to be smooth sailing

Scene: Carlisle, Emmett and Edward chase James all over (and through) Canada, trying to nail him before the tracker can find out where Bella is and kill her

Why it fits: This song is maybe a little on-the-nose, as Edward and his family members jump in and out of lakes and rivers in pursuit of James, but it’s appropriately dark

Scene: Probably the most thrilling chapter in Midnight Sun, and certainly what would be the movie’s biggest action scene, this is when Edward, Alice, Carlisle Jasper and Emmett speed from the Phoenix airport to save Bella before James can end her life

Scene: While driving (a miraculously alive) Bella to the hospital, Alice has a vision of how she’ll set up their cover story of Bella falling down the stairs

Why it fits: After this scene, the Cullens are cemented as the most “beautiful faces” in Bella’s life, both physically and as her adopted family of personal protectors

Scene: Edward, who is desperate to ensure Bella has as many “human” experiences as possible, takes her to prom at Forks High

He loves Bella, yet doesn't want to turn her into a vampire -- which leaves them at an interesting crossroads