When it comes to solar farms, sheep are great groundskeepers - Ars Technica 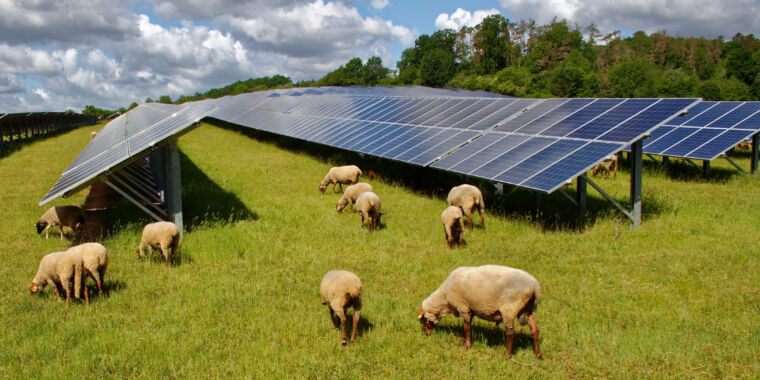 Oct 24, 2021 1 min, 47 secs
As such, solar producers are increasingly leasing farm land for their operations.It’s still a new field (Editor’s note: pun so unintended that Doug didn’t even see it until I asked), but some farmers are partnering with solar producers, the former using the latter’s land for grazing.

The solar producers pay farmers to ship their sheep over to their operations, and the sheep chow down on the weeds and other plants that might grow to the point they block the Sun from reaching the panels.

The sheep get fed, the farmers get paid, and the solar producers have their vegetation managed without using mowers and weed whackers—which can sometimes struggle to reach beneath the panels and use fossil fuels—or herbicides.

This industry has been expanding in New York state since 2017, according to a report by the American Solar Grazing Association (ASGA).

There are a few reasons sheep are the superior choice for grazing on solar farms.

The project is called “A New Dawn for Shepherds: Grazing Sheep Under Utility-Scale Solar Arrays.” Schmit is partnering with various farmers, solar industry professionals, and the ASGA, which is a nonprofit organization that connects sheep farmers with solar producers.

Together, they will determine what form New Dawn will take and what it will offer to farmers either hoping to expand their sheep production on solar farms or get started doing it.

Schmit and his team will also speak with solar producers to get a sense of what they would like to see from the organization.

According to Schmit, generally speaking, solar operations would rather just deal with a single entity rather than multiple farms.

If sheep from different farms mingle, they could potentially spread diseases, which is an issue that might need addressing.

According to Hain, solar grazing is still a young field, but farmers and solar operators are becoming increasingly interested.

The ASGA only formally began in 2019, but as of last February, it had 246 members, made up of various solar and sheep industry professionals. “I think there’s a lot of interest in it, and there’s a lot of potential,” she told Ars.