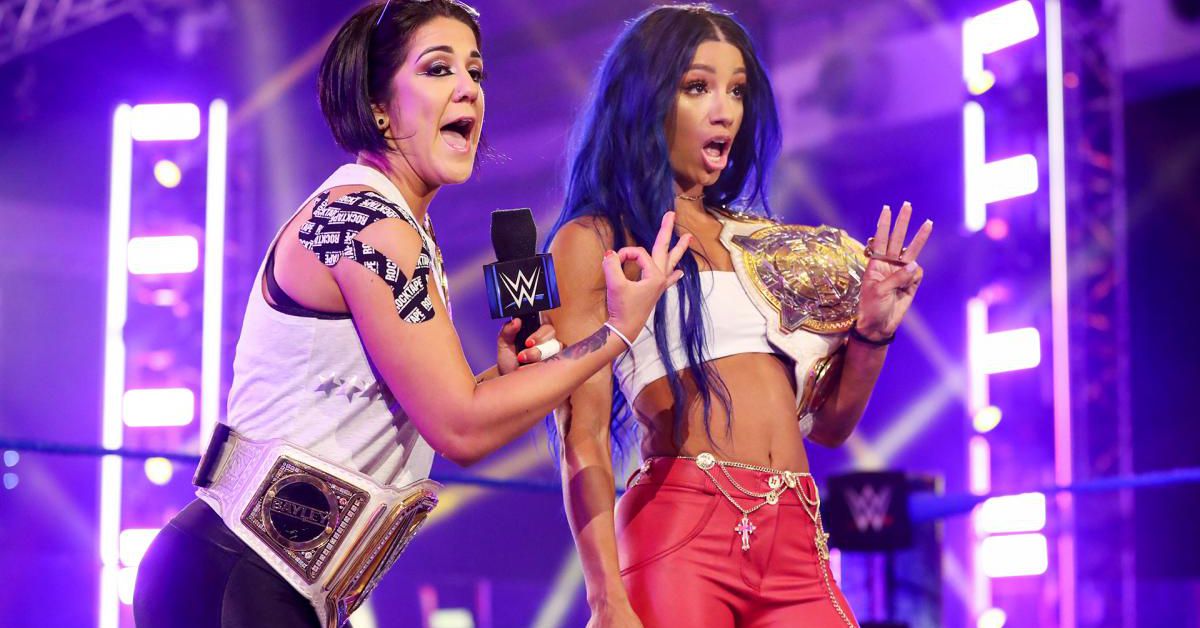 Taker called her and was embarrassed that everyone paid tribute to him last week, when Bayley is clearly the greatest champion in WWE history.

He implored WWE to have a tribute to Bayley and Banks.

Bayley said with the Last Ride documentary over, Undertaker is finally finished and Bayley throws to a tribute video.

Nikki said she can’t wait to take the Women’s title at Extreme Rules, and Bayley and Sasha laughed at her!

Nikki attacked Bayley and THIS TIME, Sasha made a match for Bayley.

The match was quick and ended in a DQ as Nikki attacked Bayley after attacking Sasha.

I mean The Taker obviously fake phone call to the tribute video and the undeniable fact that they are the workhorses of WWE right now, wrestling on all three brands and with reason.

By the way, did you notice which title Sasha had around her waist after that match.

Lame ass Baron Borebin interrupted of course and said he was an idiot.

He said that no one wants him on SmackDown and he will always be around to make Riddle suffer.

I 100% tuned out commentary here so if anything interesting was said, I wouldn’t know.

Drew Gulak - Someone else who can’t have a bad match is Drew Gulak.

Daniel Bryan said it best in one of his Zoom interviews about Gulak - you can never count Gulak out.

In fact, any time WWE thinks about putting Borebin on TV, I’ll take a Gulak/Styles match to counter it.

Kofi Kingston - One of the best pieces of continuity every week is Big E and Kofi throwing their jackets at Corey Graves.

And it’s about damn time!

For the entire time that Sami Zayn has been out, The Artists floundered about and became Borebin’s lackeys for a few weeks.

So finally, next week, they get themselves a title shot.

Bayley and Sasha were the MVPs and win everything in my mind.