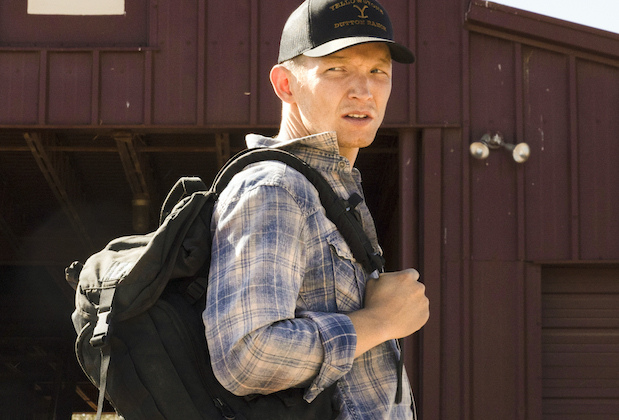 — of all showdowns between Jamie and Garrett.

But instead of an epic face-off, we — and Jamie — got a major surprise.

Tate was thriving, too, spending time in the sweat lodge with Rainwater, who told the boy’s mom, “A few more sweats, Mo will take him up on the hill.

As if Monica’s day could get any better, Kayce reassured her that they’d find a place nearby to rent — and she Googled just the right ranch?

(To his credit, the kid was a natural.) When Rip mentioned to John that Carter wasn’t long for the ranch, the big boss advised the youngster to get ugly fast.

(Could that relationship get any cuter?) At the Livestock Commission field office in Livingston, Kayce was greeted by protesters — organized by Summer Higgins (Piper Perabo, currently killing it on The Big Leap) — and soon had drawn his gun.

Upon his introduction to the protesters’ leader, Summer explained that what they were demonstrating against was a “state-sponsored police force that protects industrialized animal farming and the mass murder of millions of animals every year.” Unfazed, John asked if she’d ever plowed a field for quinoa or whatever the hell she ate, suggesting that when that happens, it kills everything on and beneath the ground.

Well, he wanted that and maybe also “don’t throw any more rocks at my son, OK?” En route to the ranch, John and Summer did indeed get to know each other better.

Then “there will come a time when Earth sheds us like dead skin,” he said, “and it will be our own fault.” Meanwhile, apparently having accepted her new job as president of Market Equities’ Montana division, Beth waltzed into Bob’s office at Schwartz & Meyer and informed him that the chair in which he was sitting… uh, “that’s my seat.” Yep, he was fired to the nth.

At the same time, Garrett found someone knock, knock, knocking on the door at Jamie’s ranch.

Meet your son.” (Didn’t seem like Garrett had contacted Christina — how would he even have known she existed? — but if so, well-played, ya scheming bastard!) Finally, at the Four Sixes, Jimmy made the acquaintance of a fantastic old fella who could tell in under a minute that the newbie was no cowboy.

“You’ve got to want this life all the way to your bones,” the charismatic coot told Jimmy, “and if you don’t, it can be absolute hell on Earth.” Jimmy, honest to a fault, admitted that he didn’t know what he wanted?

When finally a ranch hand told him that it was time to get to work, he also mentioned that “there’s three gods in Texas: the Almighty hisself, Buster Welch and George Strait?

“I hope the good Lord gave you a big d—k, Jimmy, ’cause he sure shorted you on brains.” With that, they were off to break colts — which seemed like an especially dicey proposition for Jimmy, seeing as he was supposed to still be wearing his back brace?