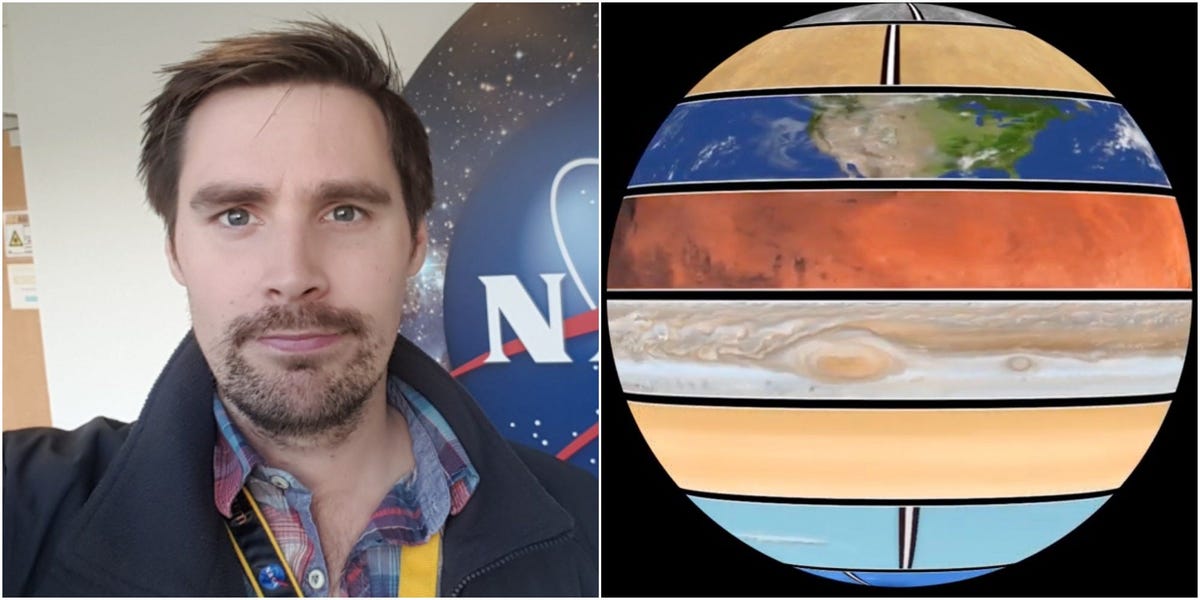 Since the planets video, O'Donoghue has almost always had another idea for an animation bouncing around in his head.

It zips around Earth faster than you can blink, and ping-pongs between Earth and the moon every 1.255 seconds.

That newborn moon — a ball of molten rock with a magma ocean — was nearly 16 times closer to Earth than it is today.

O'Donoghue's sequence starts with the moon's current position and follows it back in time to its birth, tracking its distance from Earth, apparent size relative to our planet, and the speed of its movement.

Although there is a side of the moon that we never see from Earth, it's not dark all the time.

The video shows how sunlight falls across the moon as it orbits Earth.

"Instead, everything orbits the solar system center of mass," O'Donoghue explained on Twitter.

That center of mass, called the barycenter, is the point of an object at which it can be balanced perfectly, with all its mass distributed evenly on all sides.

The solar day — the one humans count in the calendar — happens when Earth spins that extra degree, and the sun is at the same point in the sky as it was 24 hours ago.

The closer the ball is to a planet's center of mass, the stronger the gravitational force

"I really like how this one came out," O'Donoghue said

This remake of a 2008 NASA video shows what it would look like if Earth's water drained away, revealing the hidden three-fifths of the planet's surface

"This animation reveals that the ocean floor is just as variable and interesting in its geology as the continents," O'Donoghue said

"In a way, the ring system is like a mini solar system," O'Donoghue said

'There may be more we need to do,' Trudeau says amid omicron concerns | CBC News