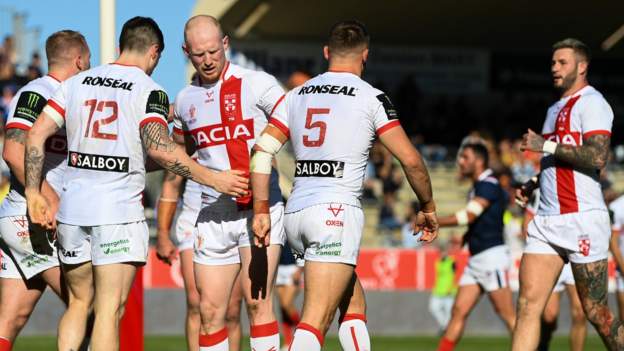 Liam Farrell, Tom Davies, Tommy Makinson and John Bateman all scored as a dominant England built a 20-0 lead over a struggling France by half-time.

Corentin Le Cam and Justin Sangare then crossed for France, with Makinson and Bateman getting their second tries.

The head coach will be pleased at the quick-fire start his side made but will have concerns about the number of errors that crept into their game as they lost control of the game in the second half as France sensed a comeback.

The visitors gave a warning of their threat as early as the second minute through a measured Jordan Abdull kick which caused the France backline problems and they opened the scoring two minutes later as Wigan second row Farrell spun away from a challenge to score.

The hosts were all over the place at the back and spaces opened up for St Helens winger Makinson and Wigan forward Bateman to go over unchallenged inside the opening 20 minutes.

But they improved significantly in the second period and Le Cam's lovely dummy and step allowed the hosts to grab their first points of the game and Mark Kheirallah's try was chalked off.

Jonny Lomax was sent to the sin-bin for the final 10 minutes and France capitalised with Sangare bulldozing over, but efforts either side of that score from Makinson and Bateman put gloss on the result.