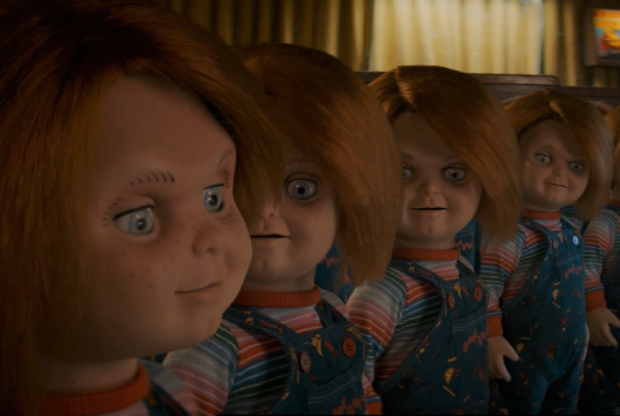 As Tiffany and Nica/Chucky moved full steam ahead with their plan to unleash swarms of killer dolls all over the country, the Good Guys (pun intended) headed to the mayor’s banquet to try and stop the impending death and destruction.

He warns Junior to stay away from the doll, and when he takes off, Chucky crawls out of the toilet bowl.

Junior asks why he didn’t kill him then and there, but Chucky says he has “other plans” for Andy.

Kyle also says that if Chucky can get one of the kids to kill, then he can create his army.

Over at the Charles Lee Ray house, Nica/Chucky tackles Tiffany to the ground and threatens to kill her.

Tiffany screams that he needs her or “the plan won’t work,” but before Nica/Chucky can act on his/her killer instinct, Junior and his Chucky doll interrupt.

The doll orders Tiffany and Junior to kill Nica/Chucky (yes, this is all very confusing), but when they refuse, Tiffany decapitates him.

(Who knew dolls could bleed that much?) When Junior approaches Tiffany with a knife, she tells him he’s going to need her to escape town once they find his dad’s body.

Tiff and Junior take off (with one doll in tow), but before the headless Chucky can brutalize Devon, Andy arrives to save the day.

After a heartfelt chat, Junior rushes past Lexy and stabs the doll in the chest, but Chucky also plunges a knife into the teen.

Jake and Devon arrive to the scene, and while Devon escorts Lexy’s sister out, Chucky relishes in the fact that Hackensack will remembered as “ground zero for the army of me.” After the doll taunts Jake about his sexuality, Jake pins him to the ground, then slams him against the wall.