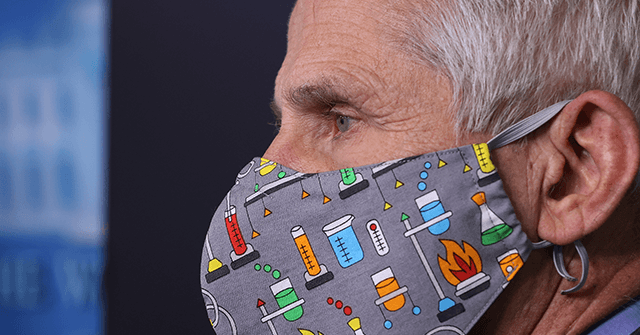 May 09, 2021 1 min, 5 secs
As you get more people vaccinated, the number of cases per day will absolutely go down.Back in March he made the same one-size-fits-all threat, only this time he used an actual number that must be achieved before mask mandates can be eased, something “considerably less” than 10,000 new cases per day, he said:.

Well, well below the 60,000 to 70,000 new infections and somewhere, and I’ll just pick a number even though there’s not a good model there yet, but I would say less than 10,000 and maybe even considerably less than that.

For the sake of making my point, I’ll go with 10,000 new daily infections, even though The Little Tyrant believes the number should be “considerably lower” than that?Where is the science in punishing the entire country, including Alaska and Hawaii, if it turns out only a handful of states are putting us over 10,000 daily infections?Another problem I have with Fauci’s obscenely stupid goal is how the “daily infection” count is, in reality, a meaningless number.

The number of new cases reported daily doesn’t come from some magic fairy who flies over the land totaling up new infections?

The “new daily infection” number is meaningless in that regard.

Then there will be “zero” new daily infections and we can all remove these goddamned masks.