On the plane with Kamala Harris 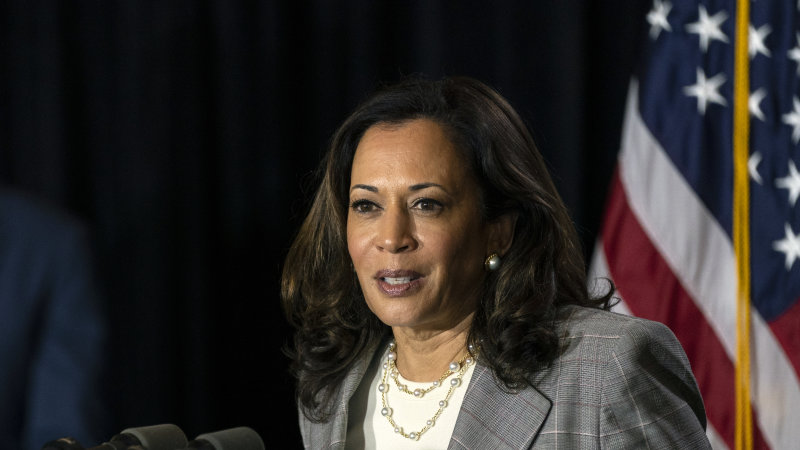 Aug 14, 2020 2 mins, 19 secs
Joe Biden and Kamala Harris will make their case to lead America at next week's Democratic convention but the race is tighter than headline polls suggest.

Kamala Harris is a real threat to Republicans and Donald Trump’s reelection hopes – and they know it. AP.

Five months ago, sitting by the window of row 27, Kamala Harris was just another cattle-class passenger on a five-hour grind across America’s flyover states.

The second point was that it confirmed Harris was still very much in the game, even though she had suspended her campaign for the Democratic presidential nomination in December after struggling to break through the party’s huge field of hopefuls.

There will be no crowds at next week's Democratic convention, which will be a virtual affair. AP.

"Her selection will undoubtedly energise the Democratic base and hopefully attract undecided voters towards the Biden campaign," Matthew Klink, a Republican political consultant based in California, tells AFR Weekend.

She helps Biden fulfil his pledge to select a woman – and because she is a candidate of colour, the Democrats and Biden hope that it highlights his sensitivity to this issue.".

For many Democrats, Harris is the perfect fit for Biden.

He has stayed largely on message by hammering home the links between nightly looting in "blue states" and their weak local Democratic leadership, and is again shaking up the country by casting doubts over the stability of the voting system by accusing Democrats of plotting voter fraud through mail-in ballots.

That's the reality now before Biden and his running mate, whose road to next week's Democratic convention effectively began as Harris' March 3 flight headed eastwards.

As the cabin crew served lunch, key Democratic endorsements for Biden were starting to pour in from around the country, crushing Bernie Sanders’ hopes.

Biden’s victory – which will be formalised at next week’s unprecedented blockbuster made-for-TV “virtual” Democratic convention – saw him transformed in just a few days from dead man walking in the opening weeks of the primary season to the party’s great hope against Trump.

Five days after landing in Washington, Harris added her name to Biden’s long list of backers, declaring she would “do everything in my power” to help him win the nomination and the White House.

Black women, as well as black men, Hispanics, "conservative" Democrats and swing voters all say they are more likely to vote for Biden with Harris on the ticket, according to an Axios-Survey Monkey poll released on Friday (AEST).

Either way, Harris – born of a Jamaican father and South Asian mother – will be a much more active and visible running mate, potentially overturning the basic rule of presidential politics: never overshadow the main candidate.